The Healing Power of Singing

As far as we can tell, music and song are as old as humanity itself. Music and singing have always featured as important parts of human daily life, ceremonies and celebrations. Many songs tell of our connections to the essence and forces of nature, our inner wisdom and the cycle of the seasons. They accompany us through everything we encounter in the course of our human lives: birth, new beginnings, relationships, separations, joy, suffering, farewells and death. They tell of our beliefs and where we draw our power. 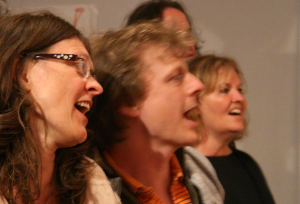 Even today, we can hardly imagine marking important events and stages in our life journey without music. However, actively singing ourselves is becoming less popular. Someone sings for us and we become consumers. Perhaps we can counter this tendency by reminding ourselves of the effects which singing can have on our mind, body and soul.

Singing can have both pain-relieving and mood-enhancing effects.

There is a highly energetic effect on our bodies, spirit and mind from singing. Our body is able to produce its own medicine to treat pain: endorphins. Chemically speaking, endorphins are closely related to morphine. So we could say that our body uses its own narcotic to relieve pain. These chemicals are also released in particularly high concentrations during biologically important processes, such as eating and sex. Endorphins have a strongly anti-depressive effect, giving us a feeling of happiness and ‘flow’. Music and singing can provide an effective boost for the production of endorphins, which explains why midwives and gynaecologists have already begun to take advantage of their pain-relieving effects during births.

Stress and anger weaken our immune system. Singing stimulates the production of immunoglobulin A (IgA), an antibody that is also passed on in our mother’s breast milk. It forms the “front line” in our body’s defence against germs and allergens. IgA is produced in mucosal and other bodily secretions (for example, in our nose, throat and intestines) neutralising any microbes that try to enter our system this way.

Scientific experiments have shown that singing can lead to an increase in levels of production of the hormone oxytocin, which is sometimes called the ‘love hormone’ because of the role it plays in stimulating empathy and protective feelings towards others. It is released during childbirth, and also during sex. It can have similar effects to opium: feelings of euphoria and tranquillity. It significantly strengthens feelings of bonding between people by generating an atmosphere of love, security and trust. So thanks to oxytocin, we can truly say that “the chemistry is right” in a group of people singing together!

Stress hormones such as cortisol are broken down during singing, and it also inhibits the release of testosterone (the ‘aggression hormone’). So we can see that music and singing create a chemical-hormonal basis for a reduction in aggression and tensions between people. In this way, they make it easier for people to develop feelings of interconnection and belonging. In other words, singing helps to prevent violence.

In schools where music plays a major role, the number of excluded pupils has been seen to be significantly lower than in control groups. Remarkable improvements in social behaviour, group cohesion, team skills and mutual tolerance were also visible in these schools. There seems to be a direct relation between the frequency and intensity with which people take part in group singing and the strength of their participation in social and health projects. So singing can indeed be said to promote our readiness to help others and contribute to our society.

The cultures with the most well known tradition of singing to maintain a rhythm and keep up our strength while working are perhaps the African and Afro-American traditions. What might otherwise be a drudge or a great effort can be made lighter and more fun through the synergetic effect of pulling together and working in a synchronised way – and this is promoted by singing together. At the same time, the songs remind the workers of the connection to their gods, blessing both the work and the workers.

There are reports from Nazi concentration camps of people singing to comfort and encourage each other. Their songs could be said to provide spiritual nourishment. And they helped the inmates to express their protest and resistance, strengthening their sense of hope. Singing together became a symbol of resistance and human dignity.

You can find more information (in German) about the effects of singing in Wolfgang Bossinger’s book, “Die heilende Kraft des Singens” (‘The Healing Power of Singing’). Some information is available in English at the website:
http://www.healing-power-of-music.com/

The renowned neuroscientist Prof. G. Huether
has also called for more encouragement for group singing in order to stimulate the brain and learning processes in a healthy way. His appeal (in German) is here and a related article in English on the ‘Intervention of music’ in education can be read here:
http://www.gerald-huether.de/populaer/english/intervention-of-music/index.php